Also in this section:

We have walked the talk. We are the only political party to offer a Vision for Trinidad and Tobago – “The Second Republic”! We are now ready to take on the challenge of contesting for office. We invite you to join us as we broaden our Political Movement so we can successfully achieve this – not for us to be office holders, but to transform Trinidad and Tobago so all can have a better life, now and in the future! 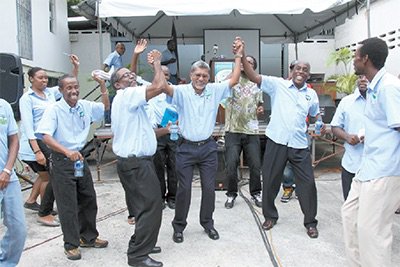 The Movement for Social Justice (MSJ) was registered as a Political Party with the Elections and Boundaries Commission (EBC) in April, 2010 prior to the May 2010 General Elections. Our Founding Congress was held on May 14, 2011. At that Founding Congress the Party’s Constitution was approved and the First National Executive was elected.

The Party, however, had been a work in progress well before the 2010 elections. Our Political Leader, David Abdulah, together with a number of very experienced progressive political personalities – Ian “Teddy” Belgrave and Lyle Townsend (both of whom have regrettably passed away) and Dr. Roosevelt Williams – held regular discussions on the need to build a progressive political party, following the collapse of the earlier party – the Movement for Social Transformation (MOTION).

This led to political education sessions with a group of youth activists – UWI students and others active in various youth organizations. Given that we recognize that “politics is activity” and that ‘it is not enough to know the world, but to change it”, the education sessions inevitably led to the formation of an informal organization – “The Walkers of the Talk” or WOTT. This soon gave way to “The Collective”, which informal organization now included not only the older political personalities, but also a number of leading trade union officers and other community and political activists.
“The Collective” started the process towards the formation of a political party. An interim leadership was chosen and regular meetings of the Activist Council were held. After careful deliberations a name was chosen for the Party: The Movement for Social Justice (MSJ); a symbol designed and agreed upon – the Fist holding a Balanced Scale to represent the struggle for social justice; and the Party’s colour chosen– Sky Blue.
We then worked out a strategy towards the Launch of the Party which we identified as taking place in late 2011 – giving us one year before the scheduled General Elections of 2012. But then Mr. Manning as the Prime Minister, under pressure from the mass movement, decided to call an early election – May 24th, 2010. In the circumstances, the MSJ decided to engage in discussions with other political parties in opposition – the Congress of the People (COP) and the United National Congress (UNC) towards the formation of a coalition of parties to contest the elections. Thus we became a member of the People’s Partnership which won the elections, with the MSJ having one elected Member of Parliament and Cabinet Minister and one Senator without portfolio. A number of MSJ members were appointed to state boards.
We were always very clear about the tactic of being in the PP. It was never an end in itself. We opposed the PNM in 2010 because under Mr. Manning’s leadership it had gone badly astray – there were attacks on the labour movement; the implementation of neo-liberal policies that were impacting negatively on working people and the poor; and a concentration of power in the hands of Manning and his chosen few, one of them being the infamous Calder Hart, the Executive Chairman of UdeCOTT. In our capacities as leaders of the mass movement we initiated and led many of the struggles against this bad governance and so we had the moral authority to not only do the hard work and struggle that would lead to a change in the government, but to be a part of the incoming government as well. And so the MSJ emerged as a political party before we had planned.
We were under no illusions about the other persons and parties who comprised the PP. However, we used our membership in the PP to hammer out the Fyzabad Declaration (which formally brought the PP into existence as a coalition) and the Manifesto to get agreement on a number of progressive changes and reforms in the interest of labour, farmers, working people and the poor, including constitution reform, legislation to deal with corruption. To the extent that these were implemented our participation in the coalition and government was legitimate and of value. But if they were not, and worse if the PP government practiced bad governance, corruption, discrimination, and sought to attack the interests of those whom we represented – labour, farmers, the poor – then we could not and would not remain.
As it turned out the PP practiced the worst governance and so we had no alternative but to leave. This we did in June, 2012 after three months of engaging the leaders of the other parties to get them to alter course. They did not. We therefore left, with our integrity intact and our credibility enhanced as a Party that truly puts country before self. We were not prepared to sacrifice our principles on the altar of political expediency and for political office.
From June 2012 to now, we have been working to build the Party. This has been through many different activities, some of the public ones being:
We contested a number of seats in the 2013 Local Government Elections;
We have made regular public statements on all the major national and many regional/international issues;
We have worked with many communities in solidarity with their struggles for social justice: farmers in Guave Road; home owners with problems with the state housing company; people fighting for land and other rights; projects for community improvement – sports and culture; - our campaigns under the theme – Justice Now!
We developed a major Policy Document – 21 Visions for the 21st Century.
We contested seats in the Point Fortin and Arima Borough Councils in the 2016 Local Government Elections;
We initiated the Foundation for Social Justice to do public education work;
We engaged in political dialogue with other persons who have a concern about the state of the Republic – leading to first, The Assemblies of Communities Empowered (ACE) and then Citizens’ Intervention – through which we had many a public discussion;
We decided not to take part in the 2015 General Elections and made a major public statement as to our reasons why. We believe we have been vindicated for all the major decisions of the Party, from 2010 to now.
We have walked the talk. We are the only political party to offer a Vision for Trinidad and Tobago – “The Second Republic”! We are now ready to take on the challenge of contesting for office. We invite you to join us as we broaden our Political Movement so we can successfully achieve this – not for us to be office holders, but to transform Trinidad and Tobago so all can have a better life, now and in the future!

Unlike the others, we don’t rely on big private party financiers to fund us. Instead we rely on people you! Support us from about $TT 35 Donate →